Prick with a Fork 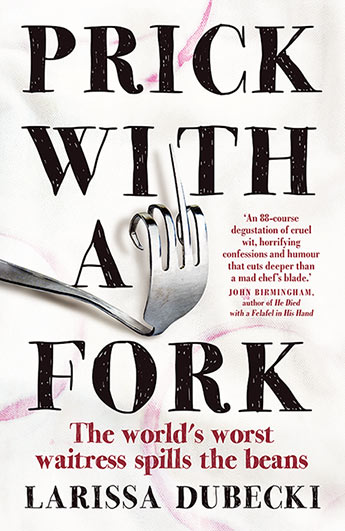 Kitchen Confidential meets He Died With a Felafel in His Hand in this laugh-out-loud hilarious expose of the restaurant industry.

If a bad attitude could be subject to copyright, my ten years as a waiter would have left me obscenely wealthy. Working the floor, I was the Kerry Packer of passive aggression. Sullen insolence was my personal trademark, diligently honed and perfected over time. For a long list of perceived diner slights - ranging from ordering the tomato sauce separately to the fries, to calling me 'dear' - I could perform a Jekyll and Hyde switch into the most perfunctory, robotic and joyless server the world has ever seen. If I didn't like a group of people I would endeavour to do my very best to ensure that the only thing left of their night was a cold, dry husk. That I regularly used something I privately referred to as the 'Dead Eyes' should reveal plenty.

Before she was one of Australia's top restaurant critics, Larissa Dubecki was one of its worst waitresses. A loving homage to her ten-year reign of dining-room terror, Prick With a Fork takes you where a diner should never go. From the crappiest suburban Italian to the hottest place in town, what goes on behind the scenes is rarely less fraught than the seventh circle of hell. Psychopathic chefs, lecherous owners, impossible demands and insufferable customers are just the start of an average shift.

Therapy for former waiters, a revelation to diners, and pure reading pleasure for anyone interested in what really happens out the back of the restaurant, Prick With a Fork is an hilarious and horrific dissection of the restaurant industry, combining the gritty take-no-prisoners attack of Anthony Bourdain's Kitchen Confidential with the gross confessions and forensic grunge of John Birmingham's He Died with a Felafel in His Hand.

Dining out will never be the same again.

Larissa Dubecki has been a restaurant critic and food writer for the past ten years, including six years as chief critic for The Age newspaper and The Age Good Food Guide. Her work has also appeared in Gourmet Traveller and Guardian Australia, and she currently writes a weekly restaurant column for Time Out.

She has appeared on MasterChef a number of times, and has been a judge on Iron Chef Australia. From 1991 to 2002 she was also a very bad waitress.