A Love Story in Letters 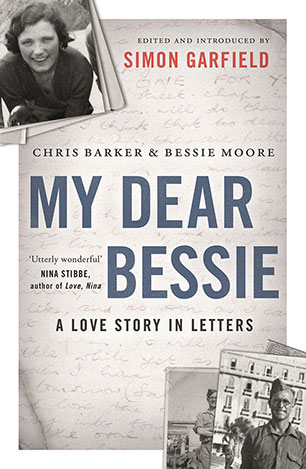 The wartime correspondence which first warmed people's hearts in Simon Garfield's To the Letter, now available in a single volume for readers to follow their wonderful and life-changing journey.

In September 1943, a twenty-nine-year-old postal clerk from North London named Chris Barker found a spare hour to write to a work colleague named Bessie Moore. His letter was innocent enough, but Bessie's response was unexpectedly enthusiastic. By their third exchange, it was clear to both of them they had ignited a passion that would not easily be extinguished.

But there were complications, such as not actually seeing each other. When he first wrote, Barker was serving as a signalman in North Africa during the war. Their passionate romance through the mail would have to survive three years of unusual obstacles, including ruined cities, enemy capture, disdain from friends and the army censor. The couple exchanged more than five-hundred letters, some steamy and full of torrents of desire, others stoic or illuminating. This book distils the most alluring, compelling and heart-warming.

It's all here: bombs, lust, comical misunderstandings and deep yearning - brought to life in the deft and elegant language that the great poets would struggle to emulate. My Dear Bessie is a moving love story set against the backdrop of war- torn Europe, a remarkable account of life during the war and above all a unique example of the power of letters to transform ordinary lives.
More books by this author

Chris Barker joined the Post Office at fourteen, working as a messenger boy and then as a counter clerk, becoming an active trade union member. He served as a signalman in North Africa during the Second World War. Bessie Moore was a colleague of Chris Barker's at the Post Office, before working at the Foreign Office, using her training in Morse code to translate intercepted German radio messages. She was thirty when twenty-nine-year-old Chris first wrote from North Africa.Simon Garfield is the author of fourteen acclaimed books of non-fiction including To the Letter, On the Map, and Just My Type. His edited diaries from the Mass Observation Archive, Our Hidden Lives, We Are At War and Private Battles, were bestsellers.