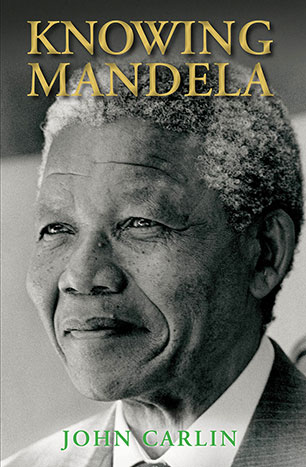 A personal tribute to the great Nelson Mandela, one of the iconic figures of our time, written by the acclaimed South Africa correspondent and author of the international bestseller Playing the Enemy (filmed as Invictus) who has been reporting on Mandela since the 1990s.

After serving twenty-seven years of a lifetime sentence for conspiring to overthrow South Africa's apartheid government, Nelson Mandela emerged to become both the catalyst and the symbol of post-apartheid South Africa. He served as the country's first black president and has since been internationally acclaimed as a powerful and vigilant humanitarian.

John Carlin began covering South African politics while serving as the London Independent's Bureau Chief in South Africa in 1989, and formed a relationship with Nelson Mandela in the decades since. Mandela has called Carlin's journalism 'courageous' and 'absolutely inspiring'. Now, Carlin reflects back on the man he has studied and admired for much of his career.

The book will begin with Mandela's release from prison in 1990, and will end with the last time Carlin saw Mandela face-to-face in the early 2000s. Spanning decades, and chronicling both personal and national memories, Carlin's tribute to Mandela is a fitting retrospective on a life well lived and its enduring legacy.
More books by this author

John Carlin grew up in Argentina and in the UK and spent 1989-95 in South Africa as the Independent's correspondent there. He has also lived in Nicaragua, Mexico and Washington, writing for The Times, the Observer, the Sunday Times, the New York Times, among other papers, and working for the BBC. His previous book, Playing the Enemy, was the basis of the film Invictus, directed by Clint Eastwood, which earned Oscar nominations for both Matt Damon and Morgan Freeman.