Gun to the Head

My life as a tactical cop. The impact. The aftermath. 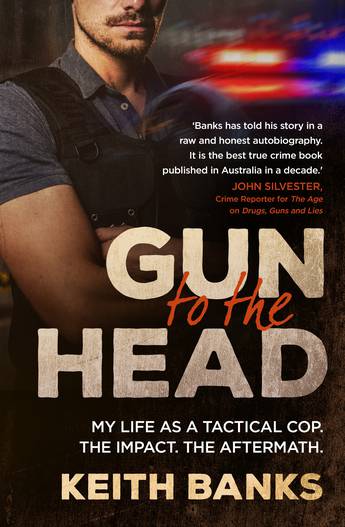 From the bestselling author of Drugs, Guns & Lies, comes Keith's story of what it was really like to be a tactical police officer in the violent and corrupt eighties

'Banks has told his story in a raw and honest autobiography. It is the best true crime book published in Australia in a decade.' - John Silvester, Crime Reporter for The Age on Drugs, Guns and Lies

'These are the best first person true crime books of that era in Queensland that I have read.' - Matthew Condon author of Three Crooked Kings

'Fear and exhilaration are blood brothers; that's what drives risk. I should have been careful what I wished for.'

Keith Banks was a member of the Queensland Police Force when not everyone with a badge could be trusted.

After serving as an undercover cop and declining an opportunity to participate in a lucrative and totally corrupt enterprise, Keith found himself sidelined from the Drug Squad. In 1984 he was transferred to the Taringa Criminal Investigation Branch as a Detective Senior Constable. That had its moments, but he wanted more. He missed the adrenaline charge of his days as an undercover cop. He discovered that rush again when, ultimately, he became one of the first full-time members of the Tactical Response Group.

This was challenging and dangerous work. Not only did Keith find himself facing off against some of Australia's most brutal criminals, but he also had to confront the demons of constantly living on the edge, of finding that fine line between good and bad where violence was normal.

Raw and confronting, Gun to the Head exposes a world of policing that few have lived.
More books by this author

Keith Banks was in the Queensland Police Force for twenty years and is one of Queensland's most decorated police officers. This is his second book. His first was the bestselling Drugs, Guns and Lies.