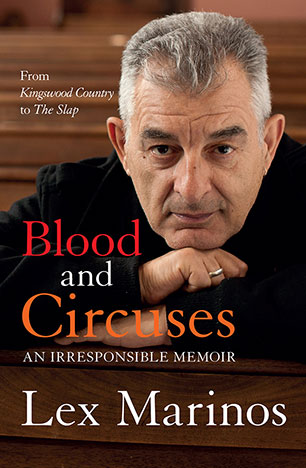 From Kingswood Country to The Slap, and beyond - the warm, funny and surprising life of one of Australia's much-loved actors and broadcasters.

In his early years on TV he was the 'wog' who was always being told to 'Leave the money on the fridge' by Ted Bullpitt in Kingswood Country. And ultimately he became the majestic patriarch, Manolis, in The Slap.

Between times, he attended the birth of Triple J, ran the rugby league touchlines for ABC Sport, was a panellist on Andrew Denton's Live & Sweaty, offered drolleries on Strictly Dancing and directed one of the segments at the opening ceremony of the Sydney Olympics, as well as appearing in umpteen films and plays.

Blood and Circuses is the wry and charming story of a young Greek Australian boy, whose family ran a cafe in Wagga Wagga in the 1950s and who dreamt of making his life in the theatre. It is a vivid account of a life lived to the full, beautifully written by a much-loved Australian.
More books by this author

Lex Marinos is best known for his outstanding performances as Bruno Bertolucci in Kingswood Country and, more recently, as Manolis in the ABC's production of The Slap, as well as dozens of films and countless stage productions. His work has taken him all over Australia, from remote Indigenous communities to the Opening Ceremony of the Sydney Olympics. Lex has also worked extensively on ABC radio since the riotous inception of 2JJ. A regular panellist on Richard Glover's popular Thank God It's Friday, Lex is a frequent speaker and writer on arts and cultural diversity in Australia. Blood and Circuses is his first book.