A Story of Documentaries 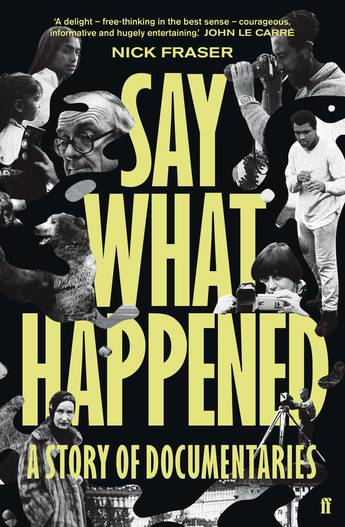 'When you film a documentary, life comes barrelling at you like a wild bear, so the filmic equivalent of the fight-or-flight mechanism takes over.' Mark Cousins

Documentary films are the rock and roll of our times. Why are they made? Who are in the tribe of documentary film-makers? Do their films really change the world?

Eighteen years ago, Nick Fraser created BBC Storyville, producing films that won Oscars, BAFTAs, and Peabody Awards. He found film-makers from all across the world covering important subjects in documentaries. In Say What Happened he describes the frenzied, intense world of documentary film-making, tracing its history back to the early pioneers, such as Dziga Vertov and his ground-breaking Man with a Movie Camera. The book deals with the British documentary tradition founded by John Grierson, and discusses the work of American masters such as the Maysles brothers, Frederick Wiseman and D.A. Pennebaker, as well as Europeans such as Marcel Ophuls, Claude Lanzmann, Chris Marker, and Werner Herzog. He interviews acclaimed documentary film-makers and discusses the work of Ken Burns, Errol Morris, and Joshua Oppenheimer, among others across the globe, as well as listing his top one-hundred documentaries, and where readers can watch them.

In a world beset with 'fake news', he argues documentaries are better at getting at the verities about life and death and that the new journalism will come from films made using new technology.
More books by this author

Nick Fraser is the author of The Voice of Modern Hatred and The Importance of Being Eton. French and British, he has lived and worked in the United States, France and Britain. After having a stroke in 2017, he has recovered through writing this book. He received the 2017 BAFTA Special Award and is a contributing editor of Harper's Magazine and frequently writes for the Observer. He is the creative director of the company, Docsville.