The Little Guide to Ted Lasso 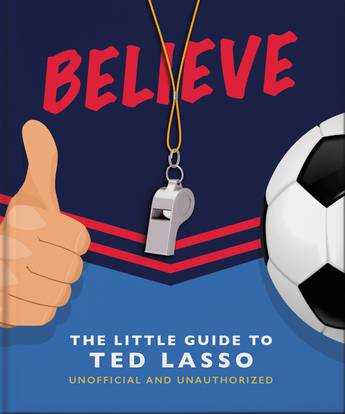 Amusing quotes from Ted Lasso, including many classic one-liners from Ted and the rest of the cast, as well as facts and stats about the actors, characters, writers and producers.

The phenomenon that is Ted Lasso is not going away any time soon. This super-funny show about an American coach who comes to England to run a Premier League football team has caught the hearts television watchers around the world - as well as the eye of critics and prize-givers worldwide. Perhaps it is the feel-good nature of the show and its timing that has seen it awarded Grammy awards aplenty, as well as many others. But it's more likely that such a funny, sharply scripted, brilliantly delivered comedy of manners, nationality, rationality, relationships and inspiration about someone who is so fundamentally decent and willing to help others, has mass appeal and critical acclaim. The third series is much anticipated, with Apple TV+ declaring that it will be out in 2022.

Believe contains amusing quotes from the show, including many classic one-liners from Ted and the rest of the brilliant cast, as well as fun facts and stats about the actors, characters, writers and producers. Not to mention tea, scones and soccer. So let's quit goofing around and get on with it... Whistle! Whistle!

SAMPLE QUOTE:
'I think I literally have a better understanding of who killed Kennedy than what is offside.' - Ted Lasso

SAMPLE FACT:
Ted Lasso first appeared in a series of short NBC Sports promos featuring Jason Sudeikis in 2013.
More books by this author
Category: Performing Arts
ISBN: 9781800692336
Table Of Contents: 'Taking on a challenge...' The early story of Ted Lasso, how he came to the UK, and quotes relating to it. Interspersed with quotes and facts about the origins of the show.
'I do love a locker room.' Ted's relationship with the players and other staff undergoes a rollercoaster ride as they all get to know each other. Quotes from the show, critic reaction and fun facts.
'Explain offside to me.' The sport of football is fundamental to the series. This chapter features facts and quotes relating to the beautiful game as seen on the TV, and how critics and consumers have reacted to it.
'Hot brown water.' There are many British customs that Ted and Coach Beard have to embrace, and this chapter looks at them all, from tea and biscuits to getting around in a Mini.
'One in 11.' Famous for his inspirational quotes, this chapter covers the many ways Ted manages to understand, inspire and sometimes help his colleagues -and how they react to him. Also contains a smattering of quotes about the show, the actors and crew.
'I believe in Rom-communism.'It's not all fun and games for Ted, and there is a more serious element in the storylines.
Publisher: Welbeck
Imprint: Orange Hippo
Page Extent: 192
Format: Hard Cover
Subject: Television