Australia and the Asia Game

The politics of business and economics in Asia 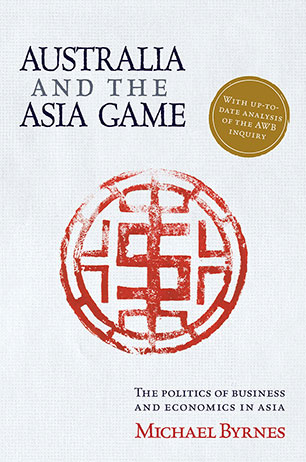 In the wake of the AWB scandal, Australia and the Asia Game goes beyond the political platitudes to examine reality and opportunity in Australia's place in Asia.

Asia's economic power has never been greater. Japan is firmly entrenched as the second largest economy in the world, and China is rapidly building itself into the next global economic superpower. Despite their economic success stories, China and Japan have little in common other than two things. They distrust each other deeply. And they play the same game.

Australia is central to North Asia's economic rise, providing minerals on a huge scale to feed industries which have become the pride of modern China and Japan. Yet by the time Australians realise they are engaged in a contest in Asia, it is often very nearly over. To successfully compete in Asia, Australia must know how Asia thinks and operates.

The Asia game is all about control. Asian groups divide and conquer, exploiting Western notions of individual competition. The Australian Wheat Board was once a fine example of how Australian exporters could recognise the traps in Asia's economic and political power games, and use the rules of play to their advantage. However, in light of the scandalous 2006 inquiry, did the AWB go too far? Michael Byrnes analyses the new challenges the outcome of the AWB affair poses for Australian exporters, and what lessons can be drawn from it.

Australia and the Asia Game goes beyond political platitudes to examine reality and opportunity in Australia's place in Asia, and in doing so reveals the essence of a game that affects every nation in the region.
More books by this author

Michael Byrnes is one of Australia's longest-serving correspondents in Asia. While stationed in various Asian centres including Tokyo, Jakarta, Manila and Hong Kong, he wrote primarily for the Australian Financial Review, but also contributed to the Financial Times, and the Asian Wall Street Journal and other publications. In recent years he has reported for the international news agency Reuters, focusing on international trade.He settled in Sydney in 1993.

3 Japan and China, and Australia's coal and iron ore

4 Many Chinas and mind tricks

5 Indonesia and the Australian press

7 How to win and get away with it: Lessons of the AWB affair

Appendix 2: Letters and the Indonesia game