Pepsi & Shirlie - It's All in Black and White 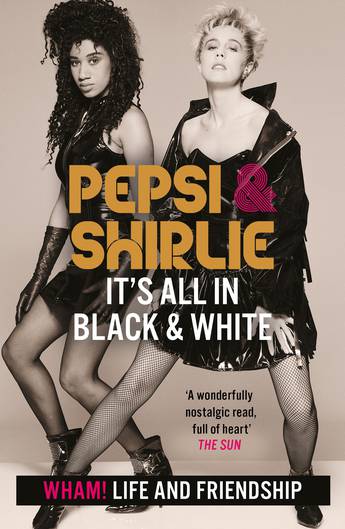 A tale of the 80s and pop stardom, from the two singers who found fame as backing singers in Wham! then going on to form their own band.

London. Wham! Pop, glitz and glamour. And two girls with stars in their eyes.

Our friendship began one windy day in 1982, outside Finsbury Park tube. It was an instant like at first sight. We were on our way to a Wham! rehearsal. Pepsi was the new girl in the band and over a car stereo, a cassette tape and that journey to Bushey we bonded. We had no idea that we were on the first of many journeys together and that soon we'd be travelling all over Europe, Australia, America, China and Japan. Or that no matter where we went, together, we'd find a way to make every exotic destination feel like home.

We'd both been teenagers during the seventies - a dreary and difficult decade, especially if you were young in London and you didn't have much money.

So, in 1982, anything was possible for us - a pair of twentysomethings who hadn't been to university, who didn't have any money, who dreamt of singing and dancing, but ultimately lived for fun. Everything felt new and life was a question mark. We had no idea what was lying ahead, but we wanted to say yes.

What we didn't know was that we were saying yes to a lifetime of connection that has endured whatever we've done, wherever we've been. From the side of the stage to its centre - we have many stories to tell.

And it's all here, it's all in black and white.
More books by this author

Pepsi Demacque-Crockett was born in London and grew up in Notting Hill. She has a gift for music and would later discover that singing and dancing were her main passions in life. She left home to tour the world as a part of Wham! and spent the following decades on stage and in studios doing the thing she loved most: singing. She now lives in St Lucia with her husband James and her gorgeous dog Shabby. She is writing her first novel.Shirlie Kemp grew up in North London surrounded by a large family. After a chance meeting with George and Andrew, she became a part of Wham! and later formed Pepsi and Shirlie. Since then, she has discovered her passion for photography and styling and has created shoots for interior design magazines worldwide. She married Martin Kemp from Spandau Ballet and has two beautiful children. She now lives in the lovely English countryside with her husband and her beloved dogs.