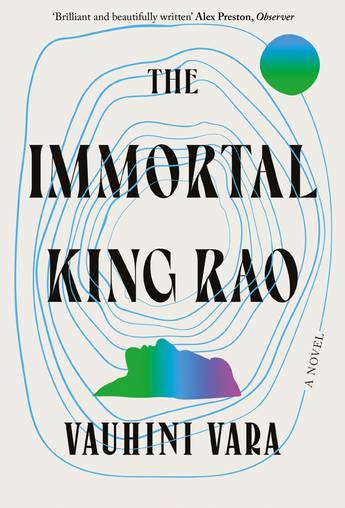 Spanning a century, The Immortal King Rao tells an epic story about power, modernity and family lineage, and introduces a bold new voice.

'A brilliant and beautifully written book about capitalism and the patriarchy, about Dalit India and digital America, about power and family and love' - Alex Preston, Observer, 'Fiction to look out for in 2022'

Athena Rao must reckon with the memory of her father, King Rao - literally. Through biotechnological innovation, he has given her his memories. His Dalit childhood on an Indian coconut plantation in the 1950s is as alive to her as her own existence in a prison cell, accused of her father's murder.

Egocentric, brilliant, a little damaged, King Rao had a visionary idea: the personal computer known as the Coconut. His wife, Margie, was an artist with a marketing genius. Together they created a new world order, led by a corporate-run government. Athena's future is now in the hands of its Shareholders - unless she can rejoin the Exes, a resistance group sustaining tech-free lifestyles on low-lying islands.

Vauhini Vara has worked as a Wall Street Journal technology reporter and as the business editor for The New Yorker. Her fiction has been honoured by the O. Henry Prize and the Rona Jaffe Foundation. From a Dalit background, she lives in Fort Collins, Colorado.