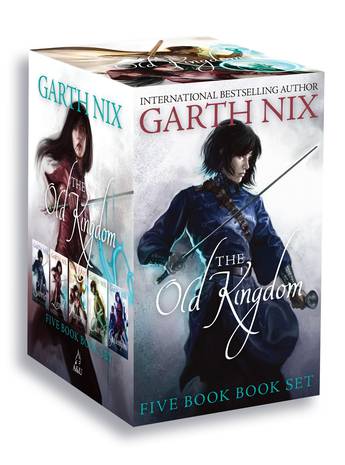 'Nix is a master of the genre: his exquisitely detailed world-building is unparalleled, and his characters are so tremendously alive and compelling that I'm convinced there's Charter Magic in every word.' (Sarah J. Maas, author of the best-selling Throne of Glass series)

Praise for The Old Kingdom series:

'There is no joy like returning to the Old Kingdom. Once again, Nix sets the standard for fantasy, bringing us a tale full of old friends and new enemies, gruesome monsters, and heroines of wit, will, and imagination.' (Leigh Bardugo, New York Times bestselling author of Six of Crows and The Grisha Trilogy)

'Garth Nix is one of the best worldbuilders in fantasy, and this book is merely further proof. I love the Old Kingdom series, and Goldenhand is an excellent continuation, packed with the excitement and passion of a storytelling virtuoso at the height of his abilities.' (Brandon Sanderson, New York Times bestselling author of the Mistborn trilogy, Warbreaker, The Alloy of Law, The Way of Kings, Rithmatist, and Steelheart.)


Garth Nix has been a full-time writer since 2001, but has also worked as a literary agent, marketing consultant, book editor, book publicist, book sales representative, bookseller, and as a part-time soldier in the Australian Army Reserve. Garth's books include the Old Kingdom fantasy series: Sabriel, Lirael, Abhorsen, Clariel and Goldenhand; SF novels Shade's Children and A Confusion of Princes; and a Regency romance with magic, Newt's Emerald. His novels for children include The Ragwitch; the six books of The Seventh Tower sequence; The Keys to the Kingdom series; and Frogkisser! which is being developed as a film by Fox/Disney. His short fiction includes more than 60 published stories, some of them collected in Across the Wall and To Hold the Bridge. His most recent novels include Angel Mage and The Left-Handed Booksellers of London. He has co-written several books with Sean Williams, including the Troubletwisters series; Spirit Animals Book Three: Blood Ties; Have Sword, Will Travel; and Let Sleeping Dragons Lie. More than six million copies of Garth's books have been sold around the world, they have appeared on the bestseller lists of The New York Times, Publishers Weekly, The Bookseller and others, and his work has been translated into 42 languages. He has won multiple Aurealis Awards, the Ditmar Award, the Mythopoeic Award, CBCA Honour Book, and has been shortlisted for the Locus Awards, the Shirley Jackson Award and others.