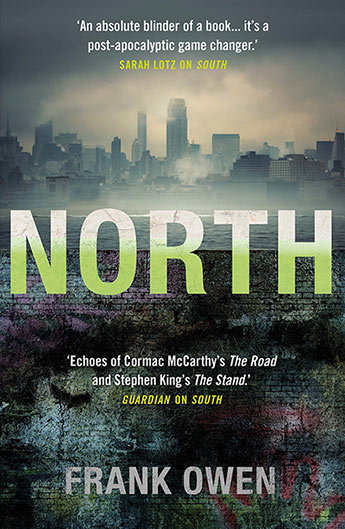 The second and final instalment in a stunning high-concept post-apocalyptic series in the vein of The Passage by Justin Cronin and Wool by Hugh Howey.

If a virus doesn't kill you, the South will...

The USA has been ravaged by Civil War. While the South has been devastated by disease, the North has emerged victorious, but terrified of reprisals. Both territories remain at the mercy of the vicious Northern dictator, Renard.

Two survivors, Dyce and Vida, find themselves scouring the Northern territories on a new and deadly pursuit; to eliminate Renard himself. Can Dyce and Vida unite a fractured America - and at what cost?

This is the story of Dyce and Vida.

This is the story of the Resistance and its last, desperate, stand.

This is the story of North.
More books by this author More books in this series

Frank Owen is the pseudonym for two authors - Diane Awerbuck and Alex Latimer. Diane Awerbuck's debut novel Gardening at Night won the 2004 Commonwealth Writers Prize and Diane was shortlisted for the Caine Prize in 2014. She has long been regarded as one of South Africa's most talented writers. Alex Latimer is an award-winning writer and illustrator whose books have been translated into several languages.