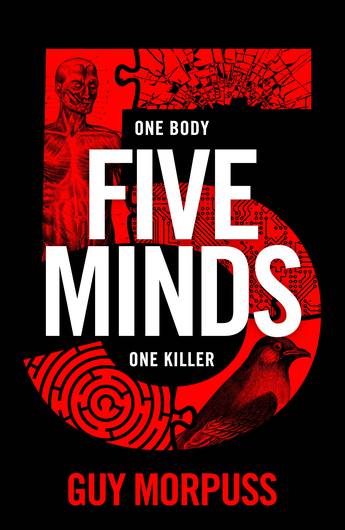 'Guy Morpuss is set to become a powerhouse in speculative crime. A feast of a book' - HELEN FIELDS

'Brilliantly inventive. If you liked The Seven Deaths of Evelyn Hardcastle, you'll love this' - EVE SMITH

ONE BODY. FIVE MINDS. ONE KILLER.

The Earth's growing population has finally been controlled. Lifespans are limited to eighty years, except for those who make an extreme choice: to become a commune. Five minds sharing one body, living for four hours at a time. But with a combined lifespan of nearly 150 years.

Alex, Kate, Sierra, Ben and Mike are a commune. They have already spent twenty-five years together, arguing, reconciling, alliances shifting and re-forming. They travel to a Death Park where games are played in which extra lifespan can be gambled like money. The plan is to win time to upgrade their next host body. But then Kate accepts a dangerous offer, and one of them disappears.

Someone is trying to kill off members of the commune. Is one of them responsible? Or is someone else playing a deadly game? It's hard enough to catch a murderer. It's almost impossible when you might be sharing a body with them...

This brilliant murder mystery blends classic crime with speculative fiction in a stunning debut.
More books by this author

Guy Morpuss is a London-based barrister and QC, whose cases have featured drug-taking cyclists, dead Formula 1 champions and aspiring cemetery owners. His favourite books have always involved twists on reality and playing with the consequences, which led to him writing his debut novel about five people sharing one body. He lives in Surrey with his wife and two children. Find him on Twitter @guymorpuss, or at guymorpuss.com.