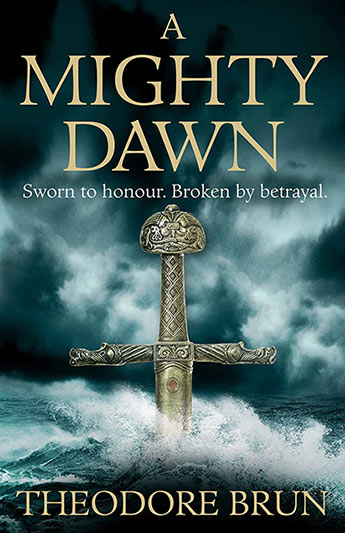 A gripping and brilliantly realized debut epic adventure set in eighth-century Denmark. This is the beginning of an ambitious new series in the vein of George R.R. Martin's A Game of Thrones.

Sworn to honour.
Broken by betrayal.

Hakan, son of Haldan, chosen son of the Lord of the Northern Jutes, swears loyalty to his father in fire, in iron, and in blood. But there are always shadows that roam. When a terrible tragedy befalls Hakan's household he is forced to leave his world behind. He must seek to pledge his sword to a new king. Nameless and alone, he embarks on a journey to escape the bonds of his past and fulfil his destiny as a great warrior.

Whispers of sinister forces in the north pull Hakan onwards to a kingdom plagued by mysterious and gruesome deaths. But does he have the strength to do battle with such dark foes? Or is death the only sane thing to seek in this world of blood and broken oaths?
More books by this author More books in this series

Theodore Brun studied Dark Age archaeology at Cambridge, where he graduated with a BA in Archaeology and Anthropology and an MPhil in History. He also rowed in the Boat Race for the university. Professionally, Theodore qualified and worked as an arbitration lawyer, in London, Moscow, Paris and finally Hong Kong. In 2010, he quit his job in Hong Kong and cycled 10,000 miles across the whole of Asia and Europe (crossing 20 countries) to his home in Norfolk. Theodore is a third generation Viking immigrant - his Danish grandfather having settled in England in 1932. He is married and divides his time between London and Norfolk. A Mighty Dawn is his first novel.