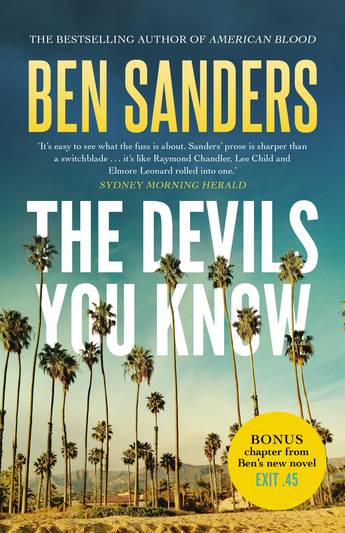 'It's easy to see what the fuss is about. Sanders' prose is sharper than a switchblade . . . It's like Raymond Chandler, Lee Child and Elmore Leonard rolled into one.' - Sydney Morning Herald on American Blood

He lands a dream job in Santa Barbara as head of security for supermarket mogul Eugene Lamar: nothing more than driving the boss to and from golf, with ample downtime for contemplating life - and how to live it with a zero body count.

But there's a problem: if Lamar's business is legit, why does he need a panic room full of assault rifles, and a .357 revolver in his car? Vincent soon finds out that Lamar owes a big debt to bad people; he's in deep and there's no way out.

Lamar's daughter Erin needs Vincent's help. But how much does she already know? Is his growing attraction to her a liability? And can he keep her safe from the brutal killers who are after her father?

It seems that Santa Barbara is a sunny town full of dark talent, and Vincent will have to revert to dark talents of his own if he's going to survive . . .
More books by this author

Ben Sanders is the author of American Blood, Marshall's Law, and The Stakes, as well as three New Zealand Fiction Bestsellers: The Fallen, By Any Means, and Only the Dead. Sanders's first three novels were written while he was studying at university; he graduated in 2012 with a Bachelor of Engineering and now writes full-time. American Blood, his highly-anticipated American debut, published in November 2015, and the second in the series, Marshall's Law, in April 2017. His third US-set novel, The Stakes, was published in 2018. Sanders lives in Auckland, New Zealand.