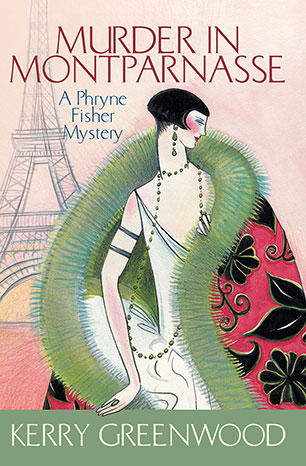 Always enticing in divine twenties fashion, Phryne, one of the most exciting and likeable heroines in crime writing today, leads us through a tightly plotted maze of thrilling adventure set in 1920s Australia.

The divine Phryne Fisher returns to lead another dance of intrigue.

Phryne's wharfie mates, Bert and Cec, appeal to her for help. They were part of this group of soldiers in 1918 and they fear for their lives and for those of the other three men. It's only as Phryne delves into the investigation that she, too, remembers being in Montparnasse on that very same day.

While Phryne is occupied with memories of Montparnasse past and the race to outpace the murderer, she finds troubles of a different kind at home. Her lover, Lin Chung, is about to be married. And the effect this is having on her own usually peaceful household is disastrous.

'Phryne Fisher is young, wealthy, beautiful, smart, confident and independently minded . and she has a knack for solving murders when she is not sipping a strengthening cocktail or planning another seduction.' - The Australian's Review of Books
More books by this author More books in this series

Kerry Greenwood has written eleven novels in the Phryne Fisher series, the most recent being Away with the Fairies (2001). She is also the author of The Childstone Cycle, Cassandra and (with Jenny Pausacker) Recipes for Crime. The Things She Loves, a collection of essays about women who kill, edited by Kerry, was published by Allen + Unwin in 1996.