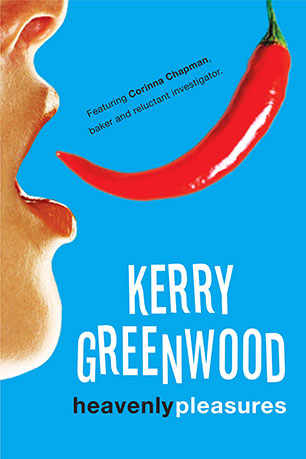 The owner of Heavenly Pleasures (maker of the most gorgeous chocolates in town) is distraught. Someone is spiking her very expensive chocolates. Is it an elaborate and horrible joke, or is it a warning that worse may yet happen? Baker and (reluctant) sleuth Corinna Chapman is compelled to investigate.

No one has less interest in mysteries than Corinna Chapman, who has bread to bake, but they seem to be arising spontaneously in the vicinity of her bakery, Earthly Delights. Between the mouth-watering distractions of loaves and muffins, of Jason her apprentice and Horatio the cat, she's keeping an eye on the door as she waits for the exciting Daniel, her recently acquired lover, to walk back into her life.

After a week of no communication Daniel finally returns, bruised and battered from a run-in with a so-called messiah. But disturbing things are also happening close to home. Juliette Lefebvre, the owner of Heavenly Pleasures and maker of the most gorgeous chocolates in town, is distraught. Someone is spiking her very expensive chocolates. Is it an elaborate and horrible joke, or is it a warning that worse may yet happen?

Heavenly Pleasures is the second delicious instalment in Kerry Greenwood's new Corinna Chapman series. If you'd like to find out more about Corinna, her bakery and her recipes, log on to earthlydelights.net.au.
More books by this author More books in this series

Kerry Greenwood has written fourteen novels in the Phryne Fisher series, the most recent being Queen of the Flowers (2004). She is also the author of The Childstone Cycle, Cassandra, Recipes for Crime (with Jenny Pausacker) and has edited The Things She Loves, a collection of essays about women who kill. Kerry has worked as a folk singer, factory hand, director, producer, translator, costumer-maker, cook and also works for Victoria Legal Aid as an advocate in the Magistrates' Courts. She is not married, has no children and lives with four cats and an accredited Wizard. In her spare time, she stares blankly out of the window. And she has no idea where she gets her ideas from.