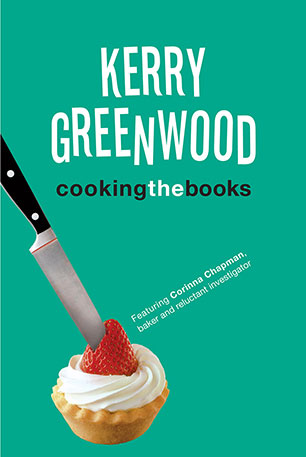 When Corinna Chapman, talented baker and reluctant investigator, accepts an offer to do the baking for the film set of a new soap called 'Kiss the Bride', twists and turns ensue, with complications involving nursery rhymes and a tiger called Tabitha!

Corinna Chapman, talented baker and reluctant investigator, is trying very hard to do nothing at all on her holidays. Her gorgeous Daniel is only intermittently at her side (he's roaming the streets tracking down a multi-thousand dollar corporate theft). Jason, her baking offsider, has gone off to learn how to surf. And Kylie and Goss are fulfilling their lives' ambition auditioning for a soapie. It should be a time of quiet reflection for Corinna but quiet reflection doesn't seem to suit her - she's bored.

Scenting a whiff of danger, Corinna accepts an offer from a caterer friend to do the baking for the film set of a new soap called 'Kiss the Bride'. The soapie in which Kylie and Goss have parts. Twists and turns and complications that could only happen to Corinna ensue involving, bizarrely, nursery rhymes and a tiger called Tabitha.

While on the other side of town, a young woman is being unmercifully bullied by her corporate employers - employers who spend a lot of time cooking the books.
More books by this author More books in this series

Kerry Greenwood is the author of many bestselling novels and the editor of two collections. The first five books in the Corinna series are Earthly Delights (2004), Heavenly Pleasures (2005), Devil's Food (2006), Trick or Treat (2008) and Forbidden Fruit (2010). Previous novels in the Phryne Fisher series are Cocaine Blues, Flying too High, Murder on the Ballarat Train, Death at Victoria Dock, Blood and Circuses, The Green Mill Murder, Ruddy Gore, Urn Burial, Raisins and Almonds, Death Before Wicket, Away with the Fairies, Murder in Montparnasse, The Castlemaine Murders, Queen of the Flowers, Death by Water, Murder in the Dark, Murder on a Midsummer Night and Dead Man's Chest. She is also the author of several books for young adults and the Delphic Women series. When she is not writing she is an advocate in Magistrates' Court for the Legal Aid Commission. She is not married, has no children and lives with a registered Wizard.