Home>Browse>Books>Children's>Young adult non-fiction>Writes of Passage: Words To Read Before You Turn 13

Writes of Passage: Words To Read Before You Turn 13 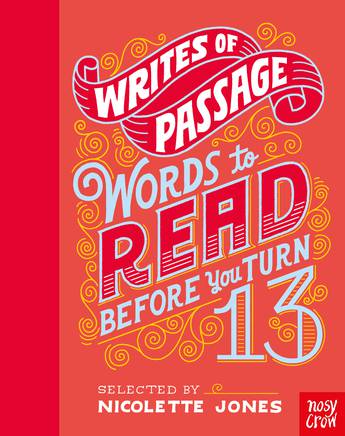 The perfect gift for graduation! An inspiring, accessible and powerful collection of pieces of writing from William Shakespeare to L.M. Montgomery to Tim Minchin.

A collection of 100 pieces of writing - poems, prose, letters, speeches, song lyrics, quotations, and more - from Shakespeare to Philip Pullman and from John Donne to Oliver Jeffers, which are in turn powerful, funny, moving, wise, and thought-provoking, expertly curated and with accessible, thoughtful commentary by Nicolette Jones, children's book critic for The Sunday Times.
More books by this author

Nicolette Jones, writer, literary critic and broadcaster, has been the children's books reviewer of The Sunday Times for more than two decades. She is a Royal Literary Fund Fellow, and a nominee for the 2012 Eleanor Farjeon Award for outstanding service to the world of children's books. Originally from Leeds, she studied at Oxford University, and at Yale as a Henry Fellow. She is a Fellow of the Royal Society of Arts, a signatory to Authors4Oceans, an honorary member of the Royal Naval Reserve Officers' Dining Club and is involved in a number of literary, charitable and social initiatives. She is married to fellow writer and journalist Nicholas Clee, and they have two daughters. She lives in London, where she is known as a local community activist and sees a lot of theatre.