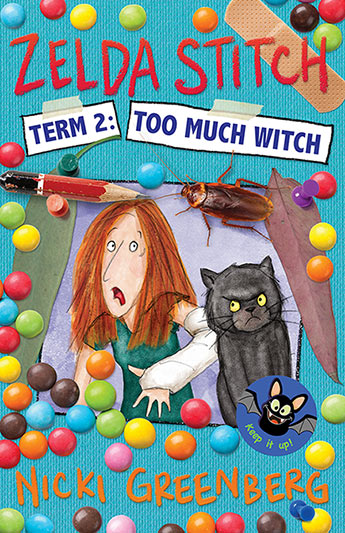 Zelda Stitch is back in the classroom and ready to start Term Two. Will teaching be easier now everyone knows she's a witch? Or will there be more mischief than one witch can manage?

Goals for Term Two:
1. Be the best teacher I can be.
2. Keep my spells to myself.
3. DO NOT UPSET MELODY MARTIN.

What's a witch to do? Zelda is likely to end up in a truckload of trouble if she can't even follow the rules she sets herself. Especially when there's an impressionable young witchling in the class, and the vice principal is on the warpath.

Soon both Zelda and the secret witchling are battling unruly magic, peer pressure and a seriously mean PE teacher. And then there's the weird smell...

With the school camp coming up fast, Zelda has her work cut out for her. And as usual, Barnaby is only making things worse.

Will Zelda get to have her hero moment - or will she cause everything she cares about to disappear?

More magic, mischief and mayhem from Zelda Stitch, the wayward witch.
More books by this author More books in this series