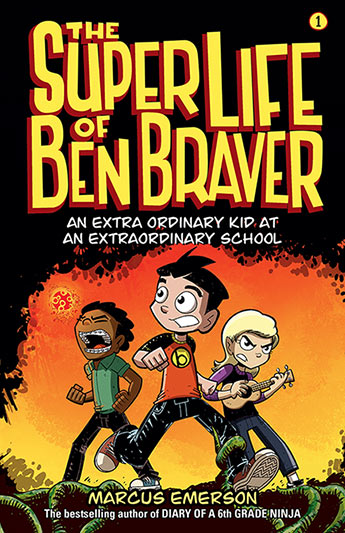 Ben Braver is selected to go to a school for children with super powers even though he doesn't actually have a super power... A hilarious adventure series about super powers, unbelievable inventions, and the greatness that lies within any kid who dreams big.

So when he's chosen to go to a secret school for kids with super powers, he sees it as a chance to be special. He's hoping his super powers will kick in soon, but it's not looking promising... Then he discovers the bully from his old school is at his new school as well, and things just get worse. And then a strange sickness spreads through the school. Can Ben solve the mystery of the zombie-like infection? And will his super powers ever show up?

A funny and action-packed new series from the author of the bestselling Diary of a 6th Grade Ninja.
More books by this author More books in this series

Marcus Emerson is the author of several highly imaginative children's books including the popular Diary of a 6th Grade Ninja series and the Secret Agent 6th Grader series. His goal is to create children's books that are engaging, funny, and inspirational for kids of all ages - even the adults who secretly never grew up. He is a comic book reader, video game player and toy collector.