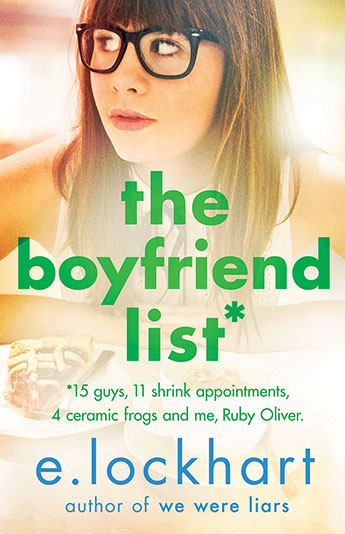 Fifteen boys, 43 lists, 120 footnotes, and too many panic attacks to count, all in four novels about Ruby Oliver. From the best-selling author of We Were Liars.

From E. Lockhart, the author of the highly acclaimed New York Times bestseller We Were Liars, which John Green called 'utterly unforgettable', comes the uproarious and heartwarming Ruby Oliver novels - The Boyfriend List, The Boy Book, The Treasure Map of Boys, and Real Live Boyfriends.

Ruby Oliver is 15 and has a shrink. She knows it's unusual, but give her a break - she's had a rough 10 days. In the past 10 days she: lost her boyfriend (#13 on the list); lost her best friend (Kim); lost all her other friends (Nora, Cricket); did something suspicious with a boy (#10); did something advanced with a boy (#15); had an argument with a boy (#14); drank her first beer (someone handed it to her); got caught by her mom (again!); had a panic attack (scary); lost a lacrosse game (she's the goalie); failed a math test (she'll make it up); hurt Meghan's feelings (even though they aren't really friends); became a social outcast (no one to sit with at lunch); and had graffiti written about her in the girls' bathroom.

But don't worry - Ruby lives to tell the tale. And make more lists.

More books by this author More books in this series

Emily Lockhart is the author of eight YA novels including the bestselling We Were Liars and The Disreputable History of Frankie Landau-Banks, a Michael L. Printz Award Honor Book, a finalist for the National Book Award, and recipient of the Cybils Award for best young adult novel.

She has a doctorate in English Literature from Columbia University and has taught composition, literature and creative writing. Her books have been translated into 33 languages. Visit Emily online at emilylockhart.com and follow @elockhart on Twitter.