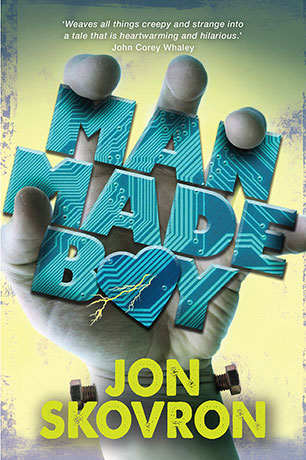 Monsters and heroes aren't born - they're made - in this brilliantly original novel and funny, fantastical coming-of-age story.

Sixteen-year-old Boy's never left home. When you're the son of Frankenstein's monster and the Bride, it's tough to go out in public, unless you want to draw the attention of a torch-wielding mob. And since Boy and his family live in a secret enclave of monsters hidden under Times Square, it's important they maintain a low profile.

Boy's only interactions with the world are through the internet, where he's a hacker extraordinaire who can hide his hulking body and stitched-together face behind a layer of code. When conflict erupts at home, Boy runs away and embarks on a cross-country road trip with the granddaughters of Jekyll and Hyde, who introduce him to malls and diners, love and heartbreak. But no matter how far Boy runs, he can't escape his demons - both literal and figurative - until he faces his family once more.

This hilarious, romantic, and wildly imaginative tale redefines what it means to be a monster - and a man.
More books by this author

Jon Skovron has been an actor, musician, lifeguard, Broadway theatre ticket seller, warehouse grunt, technical writer, and web developer. He has nine fingers, dislikes sweets, and possesses a number of charming flaws. He was born in Columbus, Ohio and after getting lost in the Broadway theatre world of New York and the high tech world of Seattle, has settled, somewhat haphazardly, in the Washington, DC area, where he and his two sons can regularly be seen not fitting into the general Government scene.