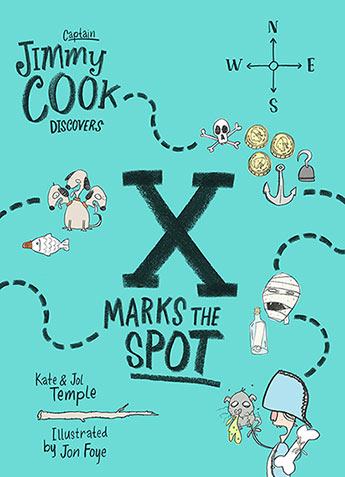 Meet Jimmy Cook - he's an explorer (he discovered Grade Three was full of surprises), an eccentric (he looks great in a tricorn hat) and someone who takes adventure very seriously. The second hilarious book in the Captain Jimmy Cook Discovers series.

Jimmy has to keep the amazing discovery a big secret because he found it behind a toilet block (that's totally out-of-bounds). That's not going to stop Jimmy and his crew! Once he digs up the dinosaur bone, he's going to be the most famous Captain James Cook in history and not even Ms Fennel will be mad with him.

But even the greatest explorers have problems. Jimmy's are these: 1) Everyone in the school now wants to help in The Dig, so it's just a matter of time before Ms Fennel puts a stop to the greatest discovery of all time and 2) a large smelly cat is sitting in his hole.

Captain Jimmy Cook is about to make the discovery of a lifetime ...
More books by this author

Kate and Jol Temple, and Jon Foye have five children's books to their names including Captain Jimmy Cook Discovers Third Grade and their picture books Parrot Carrot, Mike I Don't Like and I Got This Hat which was selected for National Simultaneous Storytime in 2016. These books have managed to find themselves on short lists and NSW Premier's Reading Lists. They have also created two digital adaptations of their picture books for which they have received international awards for creativity.