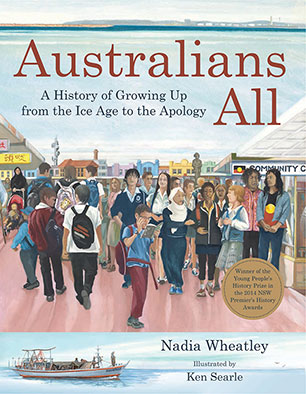 Winner of the Young People's History Prize in the 2014 NSW Premier's History Awards, this is a lavish and comprehensive history of Australia told through the eyes of young people.

Australians All encompasses the history of our continent from the Ice Age to the Apology, from the arrival of the First Fleet to the Mabo Judgement. Brief accounts of the lives of real young Australians open up this chronological narrative. Some of the subjects of the eighty mini-biographies have become nationally or even internationally famous. Others were legends in their own families and communities. Meticulously researched, beautifully written and highly readable, Australians All helps us understand who we are, and how we belong to the land we all share. It also shows us who we might be.

'Australians All is an outstanding history of Australia that captures the experiences of young people on this continent from the Ice Age to the Apology. Nadia Wheatley entwines her narrative with 80 judiciously chosen biographical snapshots that bring new insights to major events and themes in Australian history. The book's subject selection speaks to young people and gives them a voice in Australian history that is both a unique and outstanding achievement.' - From the judges of the NSW Premier's History Award

'In Australian histories there is a particular group whose tales and presence and concerns are rarely narrated. Nadia Wheatley, that great writer, tells that wide-ranging story in a way so imaginative and colourful that it would attract any young person, and make young readers feel that many of their personal struggles have been faced before, by children of the past and present.' - Thomas Keneally
More books by this author

Nadia Wheatley is an award-winning author whose books over thirty years reflect a commitment to issues of Reconciliation, social justice, and the conservation of the environment. She has been nominated by IBBY Australia for the 2014 Hans Christian Andersen Award for Writing - the highest international recognition given to a living author whose complete works have made a lasting contribution to children's literature.

Ken Searle is best known for the cityscapes that he has exhibited during a forty-year career as an artist. In his illustration and book design, he draws upon the same sense of composition to take the reader on a journey through the landscape of the book. Over the last decade, Nadia Wheatley and Ken Searle have variously written, illustrated, designed or compiled five books that express aspects of the Indigenous principles of education that they experienced while working as consultants at Papunya School (Northern Territory).

In 1988 Australia marked the bicentennial of European settlement and one of the stand-out, enduring legacies of that time was the magnificent My Place by Nadia Wheatley and Donna Rawlins in which the history of our nation over those 200 years was viewed through the lens of the children who lived in each decade in a particular house in Sydney. It is a seminal piece of work that is used to this day in the study of Australian history by young students, having been complemented with a television series, websites and a host of units of work. Its key point of difference from a lot of other texts at the time which also explored our history was that by looking at the past through the eyes of the children who were the age of its target audience, Wheatley made history accessible and meaningful for the age group. They could relate to what happened by comparing it with their own lives.

In Australians All Wheatley has taken a similar approach. Beginning in the Ice Age when the Law held the balance in the land and through the forming of the rocks and soil, through the making of mountains and the rivers, it held, through to the Apology to the Stolen Generation in 2008, Wheatley has stayed true to her belief that “story is everything”. This is not some dry tome with facts and figures and grainy pictures – through the telling of the stories of the time, amplified by the inclusion of 80 mini-biographies of real people who were there, it brings the events and their impact on the people alive. They are the stories of the children and the youth whose tales are rarely told – the “passive accessories” to the actions and decisions of the adults around them – and they are the stories of the children who became adults and changed the nation’s philosophies and direction because of the impact on them of those actions and decisions. For example, with many of our students in single parent or blended families, the stories of the fate of Amy Currie after the death of her mother and the younger Facey children whose father had left for the Kalgoorlie goldfields in a desperate attempt to support his family make what was happening real and will give pause for thought about why we have the support systems we do today.

Using just one or two pages to explore each topic, Wheatley gives the reader not only the essential information they need so we are not left overwhelmed or confused, but it is written in a conversational tone that engages and reflects. For example, on p137 under the heading ‘Being an Australian’ she asks “So what is an Australian?” and after giving some of the characteristics we associate with us, she then points out the stark definition given by The Bulletin at the turn of the 20th century when Federation and nationalism were ablaze. The Bulletin declared, “By the term Australian we mean… all white men who come to these shores with a clean record”. As Wheatley then points out, over 50% of the population were excluded because women, children, and the Aboriginal and Chinese peoples were ignored, and with the phrase “with a clean record” it denied our convict heritage on which our traits of egalitarianism and a fair go are founded. This is followed by the stories of Bill Morrow, the Facey family, Amy Currie and Charles Swancott. Just one page could be the starting point for an investigation of what it means to be Australian in 2016, the key changes that brought us to where we are, and, in conjunction with the publication of Armin Greder’s Australia to Z (Allen & Unwin, 2016) there are riches indeed. For not only are we asked who are we and where have we come from, but we are confronted with “Are we going back there?”

Richly illustrated throughout by Ken Searle with the inclusion of a range of complementary photos, accompanied by fascinating thumbnail sketches of what happened to those whose stories are featured, a glossary, index and bibliography, this is a must in the collection for Year 5 upwards that all teachers should be aware of so they can enrich and enhance their curriculum with real stories and real people. Perhaps students could pick a period and investigate the life of a child in that time, writing in the mini-biography style of the book or they could add another chapter of what the life of a child of 2016 is like. Much has changed in eight short years…

Released and reviewed in perfect timing for the new school year, Australians All puts the story in history bringing to life what we should know about this nation’s past (even if it is confronting) so we can march into the future with understanding, confidence and hope.
Barbara Braxton, Teacher Librarian, NSW