Home>Browse>Books>Children's>A First Time for Everything

A First Time for Everything 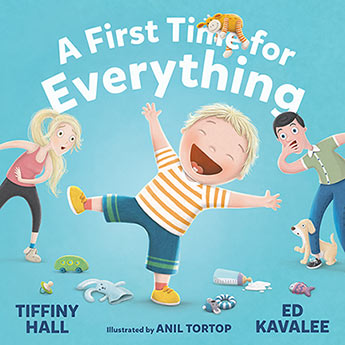 A hilarious and relatable story that perfectly captures all the messy, glorious chaos of a baby's first year, from two of Australia's best-loved TV and radio personalities.

This is the story of my family - first-time Mum, first-time Dad, and me. I'm a first-time baby.
We've never done this before... but I think it's all going smoothly.

Sometimes parenthood isn't picture-perfect. But from first nappy change to first words, it's full of love, laughter and unexpected moments.
More books by this author

Tiffiny Hall is an author, blackbelt, mentor and fitness expert, who rose to prominence as a Gladiator and a trainer on The Biggest Loser Australia. She is now transforming lives with her health and fitness program TIFFXO.com. She has published many books, including health and wellbeing, and the children's fiction series Roxy Ran.

Ed Kavalee is a much-loved comedian and personality. He has worked on Australian television and radio for over a decade, including Get This with Tony Martin, Hughesy and Kate and 2DayFM Breakfast. Best known for Santo, Sam and Ed, Thank God You're Here, and Network 10's multi-Logie award-winning Have You Been Paying Attention? and Dancing with the Stars, Ed wrote, starred in and produced the 2013 film Scumbus.

Anil Tortop was born and raised in Turkey. She moved to Australia in early 2011 and has been trying to get used to the local eight-legged house intruders and slithering visitors to her garden ever since. Anil also works as an animator and character designer, and lives with her husband in Brisbane.