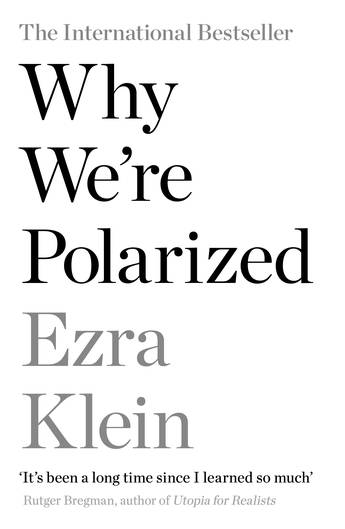 Polarisation is often invoked as proof that our societies are broken but what if it's really the system working as intended?

In Why We're Polarized, Ezra Klein reveals the structural and psychological forces behind America's deep political divisions, revealing how a system filled with rational, functional parts can combine into a dysfunctional whole. Neither a polemic nor a lament, this book offers a clear framework for understanding everything from Trump's rise to the Democratic Party's leftward shift to the politicisation of everyday culture.

Klein shows how and why American politics polarised in the twentieth century, what that polarisation did to Americans' views of the world and one another, and how feedback loops between polarised political identities and polarised political institutions drive the system toward crisis. This revelatory book will change how you look at politics, and perhaps at yourself.
More books by this author

Ezra Klein is the editor-at-large and cofounder of Vox, the award-winning explanatory news organization. Launched in 2014, Vox reaches more than 50 million people across its platforms each month. Klein is also the host of the podcast the Ezra Klein Show, cohost of the Weeds podcast, and an executive producer on Vox's Netflix show, Explained. Previously, Klein was a columnist and editor at The Washington Post, a policy analyst at MSNBC, and a contributor to Bloomberg. Join Ezra's 2.5 million followers on Twitter: @ezraklein