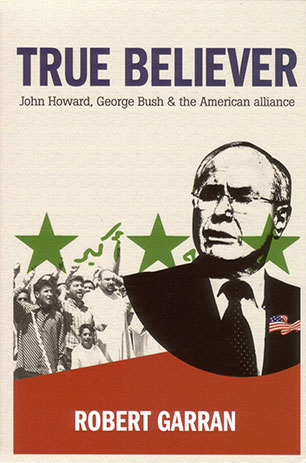 A timely and provocative examination of John Howard's devotion to the foreign policy doctrine of George W. Bush, and the dangerous international journey upon which Australia has embarked as a result.

When John Howard stood in a press conference at Washington's Willard Hotel just after the planes crashed into the Twin Towers on September 11, he knew exactly what to do. Australia would quickly pledge support for its great and powerful friend.

In True Believer, Robert Garran examines Howard's unswerving belief in the radical and dangerous doctrines of George W Bush. He argues that in his eagerness to join Bush in his war in Iraq, Howard failed to comprehend the perils. More than that, Howard has hijacked Australia's national story with his conservative nationalism - and is now using that story to take Australia on a dangerous journey.

With debate on the US alliance set to continue and with many Australians seeking a strong alternative to Howard's risky position, True Believer is both timely and thought-provoking.
More books by this author

Robert Garran has been writing about foreign policy, politics and economics for more than 20 years. He has worked as foreign affairs and defence writer and Japan correspondent for the Australian, has written for the London Economist, the Melbourne Age, the Australian Financial Review and the Diplomat and has worked as a political advisor for the Australian Labor Party. He is the author of Tigers Tamed: the end of the Asian miracle, and co-author with Don Greenlees of Deliverance: the inside story of East Timor's fight for freedom.