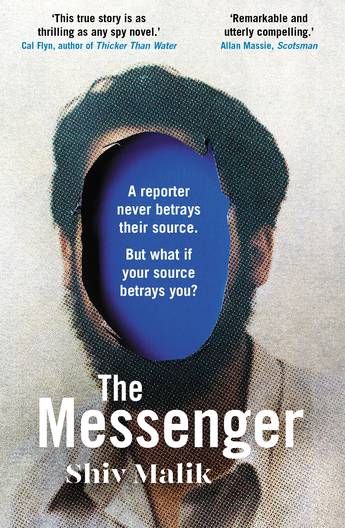 A true-life thriller with enough twists and turns, deception and betrayal to satisfy any Homeland fan.

The Messenger tells the story of an unlikely friendship between two men looking to change the world - a repentant jihadist and an idealistic journalist. This troubling real-life thriller takes us from their first meeting in a spartan flat in the rough suburbs of Manchester, to a bombing in Pakistan, a dramatic arrest and Malik's reporting career on the brink of ruin.

Ten years later, Malik returns to this extraordinary tale. He asks where we can place our trust - in reams of evidence, in a government we believe is on our side, in a terrorist who swears he's changed, in a friend who has no one else to turn to. Malik explores the uncomfortable questions about why he, as well as the wider media and the nation, surrendered to fear so easily. And he reveals how the age of terror laid the groundwork for an era of fake news and demagogues.

This is investigative journalism and storytelling of the highest order.
More books by this author

Shiv Malik is a former investigative correspondent for the Guardian. He started his career as a reporter after winning a bursary from the Guardian's Scott Trust and has worked for the New Statesman, the Sunday Times, Prospect, and the BBC amongst others. He is a panelist on the Moral Maze and a contributor in the UK media - Newsnight, Today, LBC, Channel 4 News - on issues of terrorism and economics. He is the co-author of Jilted Generation: How Britain Has Bankrupted Its Youth.