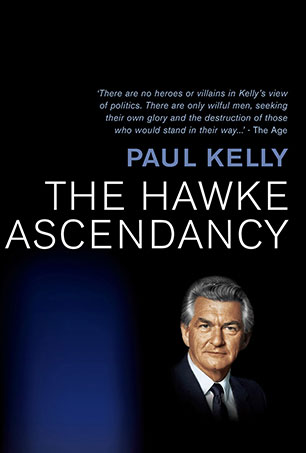 Paul Kelly's masterful study of the Hawke government, reissued to mark the 25th anniversary of its ascent to power.

Twenty-five years after becoming prime minister, Bob Hawke's rise to power is still one of the most dramatic political narratives this country has known. The Hawke Ascendancy tells the story of the Labor Party's return to office in 1983 after its crushing defeat in 1975. It is the inside account of three men Bob Hawke, Malcolm Fraser and Bill Hayden and their unique power struggle.

This definitive work deals with the personality clashes, policy achievements and power struggles in both the Labor and Liberal parties. Hawke, alienated from his own party in 1975, finally broke down the doors of its opposition to him and became Labor's saviour and one of Australia's most respected prime ministers. Fraser, invulnerable and all-powerful in 1975, eventually succumbed to external pressures and internal weakness. Hayden, an initially reluctant but then aggressive leader, took Labor to the very brink only to falter himself. And the ruthlessly ambitious John Howard was biding his time . . .

In this instalment of his incisive and compelling analysis of modern Australian politics, Paul Kelly sketches the triumph and tragedy of individuals against the big issues of the era economic management, resources development and Australia's place in the world. The Hawke Ascendancy is, above all, a gripping inside account of how Australian politics really works.

'Kelly writes a gripping political narrative that also has the powerful overtones of Shakespearian tragedy.' - The Australian Financial Review

'Kelly at his best is a wordsmith and analyst without peer among those who make their living observing and reporting national politics.' - Alan Ramsey

Paul Kelly is Editor-at-Large of The Australian. He was previously Editor-in-Chief of The Australian (1991-1996). He writes on Australian and international issues and is a regular commentator on television. Kelly was Graham Perkin Journalist of the Year (1990) and was a double Walkley award winner for journalistic excellence in 2001. He has written widely on international affairs in America, Europe and Asia and has interviewed a number of world leaders including Tony Blair, Lee Kuan Yew, George W Bush and Jiang Zemin.