The Art of Disruption

A Manifesto For Real Change 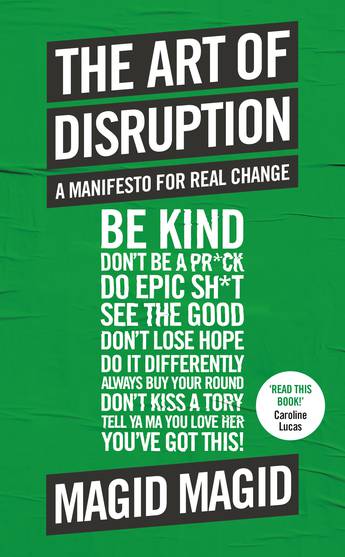 A guide to being courageous, doing better and disrupting the age-old power structures in work, life and politics

This is for when you make the placard, join the march, tweet the hashtag, join a union, begin the chant, claim the occupation, spread the word, stand up to the power, feel the revolution, seek the truth, seize the day, make the change and take control. This is for when those in power don't listen, those above don't look down, those around you remain silent and those who want to can make a change. This for the young, the old and everyone in-between.

This is The Art of Disruption and how we can all take back control and make a difference like our lives depend on it.
More books by this author

Magid Magid came to Sheffield from Somalia as a refugee aged five. He is the youngest and first refugee and first Green Party Lord Mayor of Sheffield, and became an MEP for the Green Party in May 2019.

Magid has made headlines nationally and internationally for his creative ways of campaigning while not conforming to tradition and being unapologetically himself. He has campaigned on climate change, support for migrants and refugees, set up the first UK suicide prevention charter and even banned Donald Trump from Sheffield. Magid was named one of the top European Young Leaders (Friends of Europe) 2019 and was part of the top 100 Future Leaders (apolitico.co).