How four friends with a ladder took on Brexit 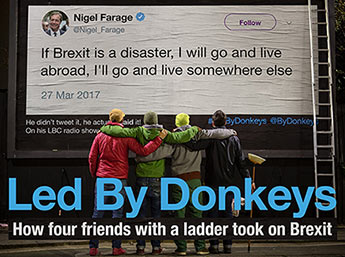 Fully-illustrated official account of Twitter sensation 'Led By Donkeys' that exposed the hypocrisies of the Brexit debacle using our leaders' published tweets.

Seeking to highlight the hypocrisy of our politicians on Brexit four friends armed with nothing more than ladders, roller brushes and a treasure trove of damning statements from our leaders slapped up the politicians' biggest lies on billboards around the country.

This guerrilla operation wasn't easy, but it wasn't long before the British public enabled them to take things into their own hands - and the rest is history.

Leave the EU or remain? An apparently simple question divided the nation in historic fashion. Many of us believed the words of these politicians. By putting up their quotes as billboards, self-styled 'Led By Donkeys' had clear intentions - to compare the promises that have been made across the years with the damning reality.

The official visual account of how four ordinary people managed to expose the government's hypocrisies in full-colour glory.
More books by this author

@LedByDonkeys are a UK-based guerrilla group of four regular guys disillusioned by government lies and keen to bring about awareness to the masses through their nationwide billboard campaign.