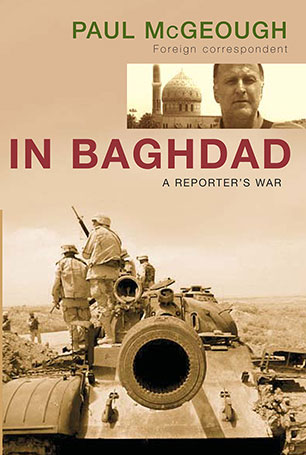 A classic, engrossing war correspondent's story by the only Australian journalist who was in Baghdad for the duration of the war.

As war loomed, reporters from around the world swarmed into Iraq. But in the end Paul McGeough was one of a handful - and the only Australian - to cover the entire war from Baghdad.

Keeping a daily diary, McGeough documented the death of the innocents and the cheap propaganda on both sides; the heroic efforts by doctors and nurses in filthy, under-supplied hospitals; the collapse of the regime; the American conquest of Baghdad; and the rampant looting that tore away the last vestiges of Saddam.

His personal diaries are a unique insight into life for reporters behind enemy lines - from the stress of colleagues dying around them to daily battles with a regime that saw them virtually become human shields and always potential hostages.

It is an extraordinary feat to be the sole Australian reporter to have experienced such raw history in the making. But Paul McGeough's remarkable achievement is to have written such a compelling narrative of the closing days of the brutal dictatorship of Saddam Hussein while under real and present danger.

Here is his definitive account of the 30 days in Baghdad that changed the Middle East forever.

'This is a serious book by a serious journalist, a man with his heart in the right place .' - Phillip Knightley, author of The First Casualty

'In the tradition of war correspondent Martha Gellhorn . driven by a desire not only to report but to understand the meaning of events.' - The Age

'Authoritative, compassionate and informative - as well as being a ripping good yarn.' - Australian Bookseller + Publisher
More books by this author

Paul McGeough is a former editor of The Sydney Morning Herald, and is now its New York-based writer-at-large. He has been a reporter for almost 30 years, covering international conflict since the 1990-91 Gulf War. McGeough's work has earned Australia's highest journalistic honours, including the Perkin and the Walkley Awards. His reporting on Afghanistan won a prestigious SAIS Novartis international award in 2001.

Day Two: Lunge at the Heart of the Regime

Day Four: A State of Denial

Day Seven: Death in the Marketplace

Day Eight: A Lull Before the Expected Siege

Day Twelve: A Guerilla War in the Offing

Day Seventeen: The US Captures the Airport

Day Eighteen: The Americans are within Greater Baghdad

Day Nineteen: The Push into the Heart of the City

Day Twenty-Three: A Time for Revenge