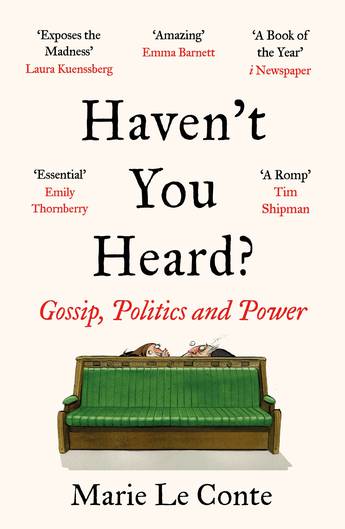 Mischief, gossip and hearsay - how British politics really works in the 21st Century...

'How facts, rumour and mischief-making become the news we all obsess over' - Tim Shipman

Ever wondered why the indiscretions of some MPs make the front page while others don't? How close journalists really are to politicians? Or how on earth the country is run when the British political system is in such a mess?

In Haven't You Heard?, Marie Le Conte looks at the role gossip, whispers and tittle-tattle play in all areas of politics - for the MPs and their advisers, the press who cover them and the civil servants in the middle of it all. From policy rows which aren't about policy at all and boozy nights with dramatic consequences, to people spinning their way to the top and dark secrets never seeing the light of day, Marie explores in great and entertaining detail the human side of the people running the country against a backdrop of political mayhem.
More books by this author

Marie Le Conte is a French-Moroccan journalist living in London. She previously was the Evening Standard's political diarist, BuzzFeed News' media and politics correspondent and went freelance in June 2017.

Since then, she has written for the Sunday Times, Guardian, New Statesman, Prospect Magazine, Stylist and many more. She has also appeared on, among others, the Today programme, Newsnight, Victoria Derbyshire and Any Questions?, as well as speaking at Chatham House, Sciences Po Paris, the House of Commons, and the Foreign Policy Centre.