The New Dark Age of Dogma 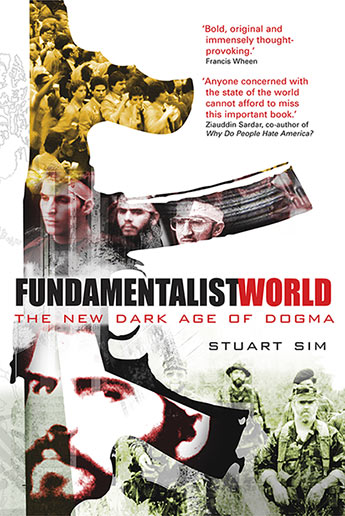 Fundamentalism is alive and well and will affect every one of us if we don't fight it now, argues Stuart Sim.

The collapse of the Argentinian economy, the rise of the far right, 9/11, suicide bombings in the Middle East, campaigns against multiculturalism, anti-abortion terrorism, the militia movement in America, teaching creationism in schools, riots at Miss World: what ties these seemingly disparate phenomena together?

All are products of a fundamentalist mentality, determined to crush all opposing ideas. Belief in these kinds of universal theories was, until recently, assumed to be in decline. Stuart Sim argues that this is far from true.

History, power, security, control, fulfilment, purity, identity and self-definition are key themes of the curiously modern renaissance of fundamentalist thought. And fundamentalism is no fringe enthusiasm, but an increasingly mainstream and powerful influence.

Whether it's religious, political, imperialist, nationalist or even market fundamentalism, believe it: we live in an increasingly fundamentalist world.
More books by this author

Stuart Sim is Professor of Critical Theory in the English department at the University of Sunderland. He is the author of for Icon, Lyotard and the Inhuman, Derrida and the End of History, Introducing Critical Theory (with Borin Van Loon), and Irony & Crisis: A Critical History of Postmodern Culture. His work has been translated into 9 languages, and he is a Fellow of the English Association.