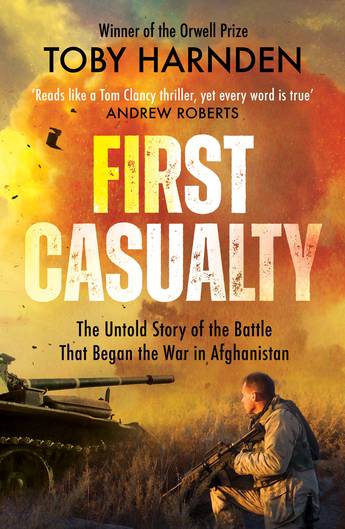 The story of the six-day battle that began the War in Afghanistan and how it set the scene for twenty years of conflict.

'Reads like a Tom Clancy thriller, yet every word is true ... This is modern warfare close-up and raw' - Andrew Roberts

Bestselling and Orwell Prize-winning author Toby Harnden tells the gripping and incredible story of the six-day battle that began the War in Afghanistan and how it set the scene for twenty years of conflict.

The West is in shock. Al-Qaeda has struck the US on 9/11 and thousands are dead.

Within weeks, UK Special Forces enter the fray in Afghanistan alongside the CIA's Team Alpha and US troops.

Victory is swift, but fragile. Hundreds of jihadists surrender and two operatives from Team Alpha enter Qala-i Jangi - the 'Fort of War' - to interrogate them. The prisoners revolt, one CIA man falls, and the other is trapped inside the fort. Seven members of the SBS - elite British Special Forces - volunteer for the rescue force and race into danger and the unknown.

The six-day battle that follows proves to be one of the bloodiest of the Afghanistan war as the SBS and their American comrades face an enemy determined to die in the mud citadel.

Superbly researched, First Casualty is based on unprecedented access to the CIA, SBS, and US Special Forces. Orwell Prize-winning author Toby Harnden recounts the gripping story of that first battle in Afghanistan and how the haunting foretelling it contained - unreliable allies, ethnic rivalries, suicide attacks, and errant bombs - was ignored, fueling the twenty-year conflict to come.
More books by this author

Toby Harnden has been a journalist for 25 years, after previously spending a decade in the Royal Navy. He is currently the Managing Editor of theWashington Examiner, and before that was the Washington Bureau Chief of theSunday Times. He has written two critically acclaimed and bestselling books, includingDead Men Risen, which won the 2012 Orwell Prize.