Drums In The Distance

Journeys Into the Global Far Right 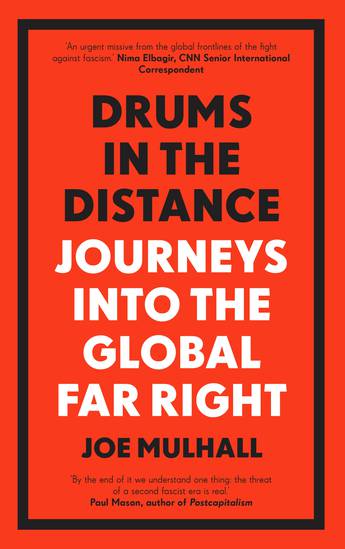 'Few, if any, are better placed to write a book of this breadth and scale than Joe Mulhall.' - Mark Townsend, Home Affairs editor of the Observer

A terrifying and timely look at the spread of far-right movements across the globe.

Joe Mulhall knows what it's like to stare fascism in the face. For a decade, often undercover at significant personal risk, he has investigated hate groups.

He infiltrated a US white supremacist militia, set up a fake Ku Klux Klan branch, has been on countless street marches with violent far-right groups across Europe, and got inside some of the most important 'alt-right' meetings ever held. Brazil, India and the US are still in thrall to authoritarian populism, and far-right views have become steadily normalised in mainstream politics. Mulhall's dramatic experiences on the front line of anti-fascist activism, coupled with his academic research, clearly explain the roots of both elected and non-elected far-right movements across the globe. Above all, he concludes, the far right should not be dehumanised - they are normal people, but with dangerous beliefs that can be defeated.

'Joe has had a unique view of the far right over the past decade as it transformed from a marginal subculture into one of the defining political currents of our time. He understands how these groups think and operate, and is perfectly placed to guide readers through this disturbing but vital story.' - Daniel Trilling, journalist and author of Lights In The Distance: Exile and Refuge at the Borders of Europe
More books by this author

Joe Mulhall is Senior Researcher at the UK's largest anti-fascism organisation, HOPE Not Hate, and a leading expert on far-right extremism. Author of British Fascism After the Holocaust (Routledge, 2020), he haswritten for the Guardian and New Statesman, and appears worldwide on TV news programmes.