Dead in the Water

A very angry book about our greatest environmental catastrophe. . . the death of the Murray-Darling Basin 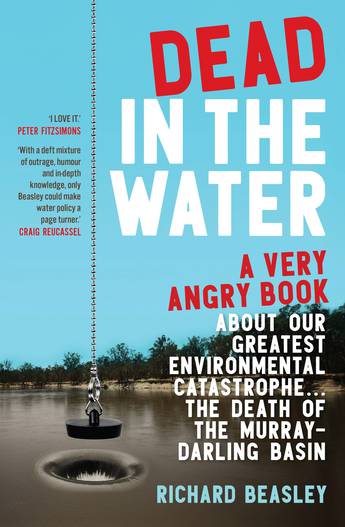 Full-throated and provocative, this is a very personal battle cry to save our most precious natural resource.

'I LOVE IT.' Peter FitzSimons

'With a deft mixture of outrage, humour and in-depth knowledge, only Beasley could make water policy a page turner.' Craig Reucassel

'It's great to shed some more light on the policy creep and mismanagement that is driving environmental degradation of many of the Murray-Darling Basin rivers.' Professor Richard Kingsford, Wentworth Group of Concerned Scientists

'We want to reset these bio-diversities and the ecologies in our country. We want to see our fish spawning as they once were, our animals coming back down to drink. Fresh quality water out of the Coorong, not this super saline stuff that we're living in today's environment. It's slowly dying. You can smell the impact of what's happening . . .' Grant Rigney, Ngarrindjeri Nation, from his sworn evidence at the Royal Commission into the Murray-Darling Basin.

Richard Beasley is fed up. He's fed up with vested interests killing off Australia's most precious water resource. He's fed up with the cowardice and negligence that have allowed Big Agriculture and irrigators to destroy a river system that can sustain both the environment and the communities that depend on it. He's fed up that a noble plan to save Murray-Darling Basin based on the 'best scientific knowledge' has instead been corroded by lies, the denial of climate change, pseudoscience and political expediency.

He pulls no punches. He's provocative, he's outrageous, he points the finger without shame. And he will leave you very, very angry. Dead in the Water would be political satire of the highest order . . . if it weren't so tragically true.

Richard Beasley is a Senior Counsel at the New South Wales Bar. He was the Senior Counsel Assisting at the Murray-Darling Royal Commission, established by the South Australian Weatherill Government in 2018 and conducted by Commissioner Bret Walker SC. Apart from that, he is the author of five novels, including Hell Has Harbour Views, which was adapted for TV and screened by the ABC.