How a government lied its way to political triumph 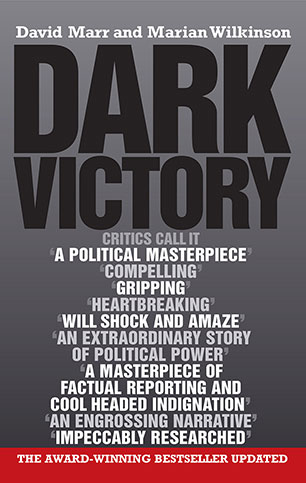 This genre-breaking inside account of the Tampa, the Children Overboard affair and the Pacific Solution. Updated with startling new information.

Dark Victory is not only a fascinating description of past events: between the lines there are dark portents of repercussions yet to come.'

Marr and Wilkinson have pulled together the whole confronting tale of how through iron will, subterfuge, disregard for conventions of a civilised seafaring nation, the misuse of secret intelligence and the use of military force against the helpless, the federal government closed its borders in the quest for votes Through forensic research, the authors have managed to build a story that both thrills and appals.'

They put lives at risk. They twisted the law. They drew the military into the heart of an election campaign. They muzzled the press. They misused intelligence services, defied the United Nations, antagonised Indonesia and bribed poverty stricken Pacific States. They closed Australia to refugees - and won a mighty election victory.

David Marr and Marian Wilkinson, two of the country's most accomplished investigative journalists, burrow deep into the ways of the Howard government. They reveal the secret history of the campaign against boat people that began with the Tampa and ended ten extraordinary weeks later with the Australian people giving John Howard his third, most daring election victory.

Dark Victory is a thrilling and provocative account of events that shattered many of the myths Australia had about itself and changed profoundly how Australia is seen in the eyes of the world. It is also a potent reminder of the fleeting nature of truth in politics.
More books by this author

Marian Wilkinson is one of Australia's leading journalists and the author of The Fixer a revealing account of the life and career of Labor's Graham Richardson. She has worked as a senior reporter for the Australian, deputy editor of the Sydney Morning Herald and executive producer of Four Corners. She is currently the Washington correspondent for the Sydney Morning Herald and the Age.

David Marr is the award-winning author of Patrick White: A Life Barwick and The High Price of Heaven. In a career spanning thirty years, he has written for The Bulletin and the Sydney Morning Herald, edited the National Times and reported for Four Corners. He is now presenter of ABC-TV's Media Watch.

12. The voyage of the Manoora: September 3 to October 8

13. Launching the campaign: to October 8