How a Tiny Caste of Oxford Tories Took Over the UK 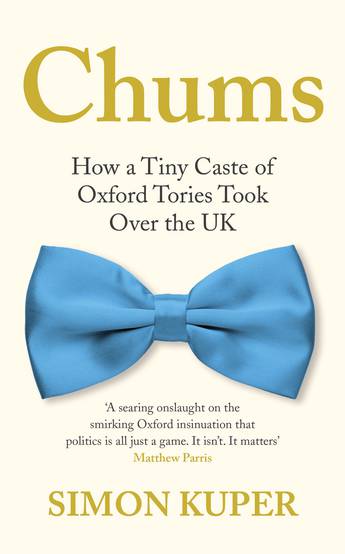 When the fate of the nation is in your hands, who do you call?

'A searing onslaught on the smirking Oxford insinuation that politics is all just a game. It isn't. It matters' - Matthew Parris

Boris Johnson, Michael Gove, David Cameron, George Osborne, Theresa May, Dominic Cummings, Daniel Hannan, Jacob Rees-Mogg: Whitehall is swarming with old Oxonians. They debated each other in tutorials, ran against each other in student elections, and attended the same balls and black tie dinners. They aren't just colleagues - they are peers, rivals, friends. And, when they walked out of the world of student debates onto the national stage, they brought their university politics with them.

Eleven of the fifteen postwar British prime ministers went to Oxford. In Chums, Simon Kuper traces how the rarefied and privileged atmosphere of this narrowest of talent pools - and the friendships and worldviews it created - shaped modern Britain.

This is a searing critique of the British ruling class and its 'chumocracy' by the smartest commentator in journalism today.
More books by this author

Simon Kuper is an author and Financial Times journalist, born in Uganda and raised around the world. An Oxford graduate, he later attended Harvard as a Kennedy Scholar. He has written for the Observer, The Times and Guardian, and is also the author of The Happy Traitor.