Out of The Sun

Essays at the Crossroads of Race 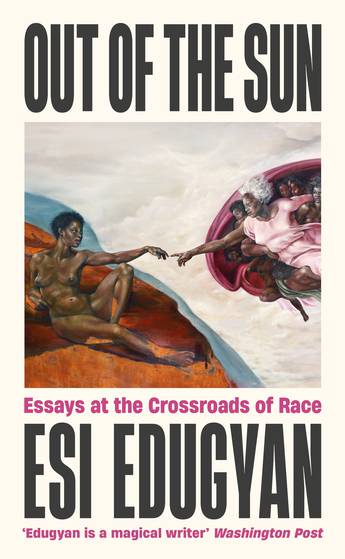 Two-time Booker Shortlistee and internationally bestselling author Esi Edugyan delivers a searing analysis of the relationship between race and art.

History is a construction. What happens when we bring stories consigned to the margins up to the light? How does that complicate our certainties about who we are, as individuals, as nations, as human beings?

As in her fiction, the essays in Out of the Sun demonstrate Esi Edugyan's commitment to seeking out the stories of Black lives that history has failed to record. Written with the death of George Floyd and the rise of the Black Lives Matter movement in the background, in five wide-ranging essays Edugyan reflects on her own identity and experiences as the daughter of Ghanaian immigrants. She delves into the history of Western Art and the truths about Black lives that it fails to reveal, and the ways contemporary Black artists are reclaiming and reimagining those lives. She explores and celebrates the legacy of Afrofuturism, the complex and problematic practice of racial passing, the place of ghosts and haunting in the imagination, and the fascinating relationship between Africa and Asia dating back to the 6th Century.

With calm, piercing intelligence, and a refusal to think on anyone's terms but her own, Edugyan asks difficult questions about how we reckon with the past and imagine the future, and invites the reader to think alongside her in working out what the answers to these may be.
More books by this author